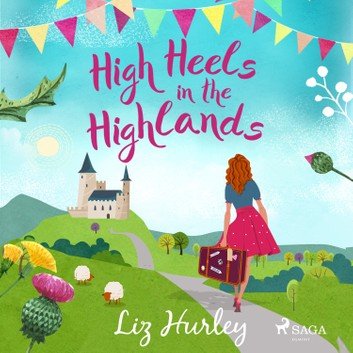 As soon as she was out of the long drive, Clem pulled the car to the side of the road and took a deep breath. She got out of the car and jumped about a bit, swinging her arms and trying to flex out some of her temper. It was stupid to drive angry and Clem was raging. She had screwed up her first meeting, but she didn’t feel like she was entirely to blame. Miss Farano had been rude to her, then lied to her and finally she had been rude about her mother. Clem could quite happily push her off one of the battlements. She felt her anger boiling up again and she paced backwards and forwards along the empty road.

There was no pavement and she was in her Manolos, so couldn’t step on to the grass verge. One of the joys of having a successful model for a kid sister meant that Paddy was always keeping an eye out for bargains for her from end-of-season catwalks and runway shows. Just because they were cheap, though, didn’t mean she didn’t treasure them and she certainly couldn’t justify ruining them, hiking across the Scottish wilderness.

Looking down at the pretty orange and pink floret on the toe of her shoe, she tried to envisage a Manolo hiking boot. Grinning to herself she took a deep breath. She needed to go and find some pavements and civilisation, coffee on IV and some inspiration.

Once back in her car, she was surprised by how far away the satnav was suggesting it was to civilisation, even when she selected the direct route. But she headed off and soon the road began to rise. Wherever she looked she was treated to glorious views, the tension receding from her shoulders and neck. As she summited a hill she saw a collection of tall stones, standing in a circle just by the side of the road. She pulled into a layby and went to have a look. Stepping down onto the tarmac, she was surprised to see the puddles on the side of the road were actually iced over and indeed there was still snow in the dips in the land. She had considered removing her shoes to walk over to the stones, but the ground was frozen hard and her heels didn’t sink. It was freezing up here but beautifully still.

There wasn’t a cloud in the sky and wherever she looked all Clem could see was countryside. Apart from the road she stood on, and the stone circle, there wasn’t another man-made thing in sight. She zipped up her coat and tip-toed over to the stones, picking her way through small clumps of bare heather. Below, the land swept away to a collection of lochs dotted throughout with small islands. Behind her in the distance was a run of mountains shining white in the sun. As she listened, all she could hear was her own breath and a large bird calling out overhead. She looked up and followed its wide wings as it floated high up in the blue. She wondered if it could see her. Did it care?