Inauguration fashions, a story behind every outfit

Big events always attract impressive outfits. This year’s American presidential inauguration seemed no different, except this time many of the clothes seemed to be worn with purpose. There were stories behind the designs. More importantly, many of the outfits were being worn by women in positions of power. Poet laureates, vice presidents, first ladies. These women were not there to look decorative.

I love how clothes have a role to play in storytelling. In the Tudor period there were incredibly strict laws on who could wear what. Fabrics and colours were heavily policed, and only certain classes were allowed to wear particular items. By simply walking into a room your clothes gave an immediate indication of your power and position, or lack of.

Sumptuary laws of the middle ages

Clothes as well as statements of power, can also indicate politics and religion. Muslims, puritans, Plymouth Brethren all choose to express their affinity for a religious idea through the clothes they wear. Even the colour of your outfit can make a statement, purple once the sole privilege of royalty, is now often worn in support of suffragettes and emancipation.

So, what about all the lovely clothes from the 2021 inauguration? My first favourite was worn by Dr Jill Biden, teacher, lecturer and now First Lady, to the Inauguration Ball. She wore a matching white coat and dress embroidered with all the US state flowers, even her face mask matched. In the word of the designer, Gabriela Hearst

The message of Unity is the main inspiration for the creation of the Ensemble. Unity makes strength and it is needed for the road ahead. The blooming symbol to represent this message are the federal flowers from every state and territory of the United States of America. The flowers are embroidered into the cashmere coat on the hem line in an pattern that rises organically on the side’s seams. On the dress, the embroidery is placed on the silk organza neckline and arms. The body of the dress is constructed in silk wool cady.

The Delaware flower is positioned at the heart level of The First Lady, from there, all the other flowers branch out.
The pieces were made entirely in New York City. The Embroidery and Coat were crafted in the garment district and the dress was assembled at the inhouse studio. Each flower took approximately two-four hours to embroider. Careful placements and color selections were carefully studied for weeks.

Inside of the coat, representing the lifelong calling and service of Dr. Biden as an educator is a hand embroidery on the lining with a quote from Founding Father Benjamin Franklin
“Tell me and I forget. Teach me and I remember. Involve me and I learn.”
The materials used were existing available fabrics to minimize the impact on the environment

All images and videos from Gabriela Hearst, more details on Instagram below.

One of the reasons I loved this outfit the most, is because an embroidered outfit sits at the heart of my third book, High Heels in the Highlands. In it, Clem and the villagers take turn in embroidering a wedding gown for a local lass. It’s a really gorgeous part of the book and I loved writing it, but back to the inauguration. 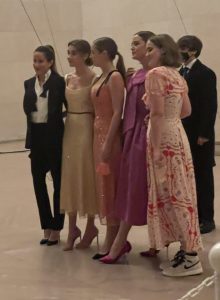 Jill Biden is also seen wearing a corsage that Joe would have presented to her for the evening. They really are a lovely family, which takes me onto the children and grand children. In this fabulous line-up you can see a bunch of happy cousins all perfectly dressed but I particularly liked Maisy, who chose to match her dress with Nike Air’s.   The picture also shows Biden’s daughter Ashley, who chose to wear a tuxedo to the ball just like her old man. In fact, both are made by Ralph Lauren, Ashley paired her tux with high heels whereas Joe settled on flats!

The Simpsons and in praise of children

In her purple inauguration outfit, fans of the Simpsons spotted something familiar. When Lisa Simpson becomes president she is wearing a purple jacket and pearls, almost identical to Harris. Can the Simpson’s predict the future? Was Harris playing a little joke or was it simply coincidence?

There was more humour from the Harris camp when her two great nieces sported leopard-print coats just like their great aunt did when she was little. Amara, 4, and Leela Ajagu, 2, wore the leopard-print outfits in homage to a similar get-up their great aunt Kamala wore in a photograph from the ’70s, alongside their grandmother, Maya Harris (Kamala’s sister), and great-grandmother, Shyamala Gopalan. 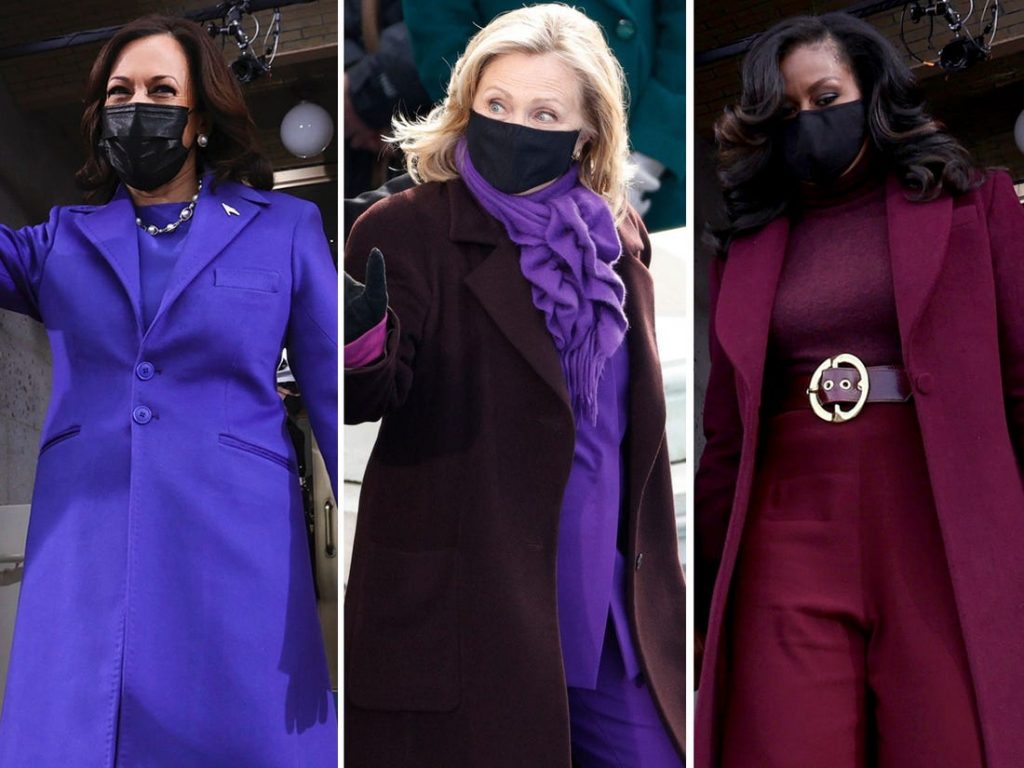 My final outfit of note was that worn by National Youth Poet Laureate, Amanda Gorman. She obviously got the note about single block colours but unlike the older ladies she avoided the plums, blues and purples. Instead she wore a vivid yellow Prada coat with a big shinny red hair band. I wonder if she knew how much she would pop out against the backdrop of the blue carpeted stairs? As awesome as she looked it was her words that were more amazing. I’ve included the text below. I’ve also included a link to watch her perform it as it is a performance, just watch her hands.

On her finger you may notice a large ring, it was a gift from Oprah Winfrey and shows a bird in a cage.  She gave the young poet gold and diamond hoop earrings and a caged bird ring, in honour of Maya Angelou and her book, “I Know Why the Caged Bird Sings.” Maya Angelou was the poet laureate at Bill Clinton’s inauguration.

I think Maya Angelou would have approved. And so too would Benjamin Franklin.

The Hill We Climb

When day comes we ask ourselves,
where can we find light in this never-ending shade?
The loss we carry,
a sea we must wade
We’ve braved the belly of the beast
We’ve learned that quiet isn’t always peace
And the norms and notions
of what just is
Isn’t always just-ice
And yet the dawn is ours
before we knew it
Somehow we do it
Somehow we’ve weathered and witnessed
a nation that isn’t broken
but simply unfinished
We the successors of a country and a time
Where a skinny Black girl
descended from slaves and raised by a single mother
can dream of becoming president
only to find herself reciting for one
And yes we are far from polished
far from pristine
but that doesn’t mean we are
striving to form a union that is perfect
We are striving to forge a union with purpose
To compose a country committed to all cultures, colors, characters and
conditions of man
And so we lift our gazes not to what stands between us
but what stands before us
We close the divide because we know, to put our future first,
we must first put our differences aside
We lay down our arms
so we can reach out our arms
to one another
We seek harm to none and harmony for all
Let the globe, if nothing else, say this is true:
That even as we grieved, we grew
That even as we hurt, we hoped
That even as we tired, we tried
That we’ll forever be tied together, victorious
Not because we will never again know defeat
but because we will never again sow division
Scripture tells us to envision
that everyone shall sit under their own vine and fig tree
And no one shall make them afraid
If we’re to live up to our own time
Then victory won’t lie in the blade
But in all the bridges we’ve made
That is the promise to glade
The hill we climb
If only we dare
It’s because being American is more than a pride we inherit,
it’s the past we step into
and how we repair it
We’ve seen a force that would shatter our nation
rather than share it
Would destroy our country if it meant delaying democracy
And this effort very nearly succeeded
But while democracy can be periodically delayed
it can never be permanently defeated
In this truth
in this faith we trust
For while we have our eyes on the future
history has its eyes on us
This is the era of just redemption
We feared at its inception
We did not feel prepared to be the heirs
of such a terrifying hour
but within it we found the power
to author a new chapter
To offer hope and laughter to ourselves
So while once we asked,
how could we possibly prevail over catastrophe?
Now we assert
How could catastrophe possibly prevail over us?
We will not march back to what was
but move to what shall be
A country that is bruised but whole,
benevolent but bold,
fierce and free
We will not be turned around
or interrupted by intimidation
because we know our inaction and inertia
will be the inheritance of the next generation
Our blunders become their burdens
But one thing is certain:
If we merge mercy with might,
and might with right,
then love becomes our legacy
and change our children’s birthright
So let us leave behind a country
better than the one we were left with
Every breath from my bronze-pounded chest,
we will raise this wounded world into a wondrous one
We will rise from the gold-limbed hills of the west,
we will rise from the windswept northeast
where our forefathers first realized revolution
We will rise from the lake-rimmed cities of the midwestern states,
we will rise from the sunbaked south
We will rebuild, reconcile and recover
and every known nook of our nation and
every corner called our country,
our people diverse and beautiful will emerge,
battered and beautiful
When day comes we step out of the shade,
aflame and unafraid
The new dawn blooms as we free it
For there is always light,
if only we’re brave enough to see it
If only we’re brave enough to be it.

Are you ready to return to Hiverton?