Cornish authors revealing their love of Britain’s most romantic corner.

Maid in Cornwall – Even today, wherever you go in Cornwall you will hear people being called maids or lovers. It always makes me smile when my local fishmonger, a fabulous woman called Kim, calls me her lover, and the chap who fixes my car calls me a maid. I am neither his maid nor her lover but they are terms of friendliness and very Cornish. So I would like to introduce you to a few more lovers and maids.

I am delighted to bring you a series of interview with Cornish authors this autumn. All the authors have two things in common, they write gorgeous stories set in Cornwall and they love Cornwall. This has been such a fun thing to do and I hope you enjoy it as much as I have. We start with the fabulous Jane Johnson, who as you will read, has tin in her veins. 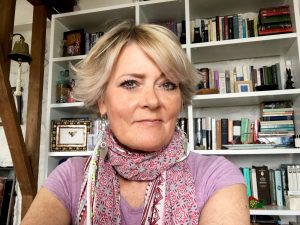 I’m from Cornwall and have worked in the book industry for 30 years as a bookseller, publisher and writer. For many years I was responsible for publishing the works of JRR Tolkien, and later worked on Peter Jackson’s Lord of the Rings movie trilogy, spending many months in New Zealand with cast and crew (I wrote the official visual companions to the films). The authors I publish include George RR Martin (creator of A Game of Thrones), Dean Koontz, Robin Hobb, Stuart MacBride, Mark Lawrence, Raymond E Feist and SK Tremayne.

While I was in Morocco in 2005 to research The Tenth Gift I met my soon-to-be husband Abdellatif, a Berber tribesman from a village in the Anti-Atlas Mountains. Returning home, I gave up my office job in London, sold my flat and shipped the contents to Morocco and we were married later that year. We split our time between Cornwall and Morocco, and I still work remotely as a Fiction Publishing Director for HarperCollins. I’ve been writing novels for 20 years now – for both adults and children. My first historical novel – The Tenth Gift – has been published in over 25 countries worldwide.

What’s your connection to Cornwall?

I was born into a Cornish family and went to infant and junior school in Fowey, then to Liskeard Grammar School. Mum’s family were copper miners, carpenters, and fishermen out of Mevagissey, and Looe, but the family stretches all the way down to Penzance. They were Tregennas, Martins, and Kittos (hence Olivia in The Sea Gate). A family member traced our genealogy back to the 14th century in Duloe, St Ives, Penzance and Veryan.

What is your first Cornish memory?

Cultivating caterpillars on our nasturtiums in the garden at Fowey – the hot, sunny, peppery smell of the leaves and the tigerish stripes of the caterpillars.

I’m not even going to ask you if you are #jamfirst but what’s your favourite Cornish treat?

Well, of course I’m jam first: anything else is heresy! Before I had to give up white flour and potatoes it would’ve been Grandma’s pasties: now it’s clotted cream, especially the buttery crust. Strawberries should never be served with anything else!

Though born and raised on the south coast, I adore the rugged wildness of the north coast: my favourite walks are along the cliffs between Pendeen and Zennor, and all my favourite climbs are along those cliffs, especially at Bosigran.

Care to share an image of Cornwall that you love? 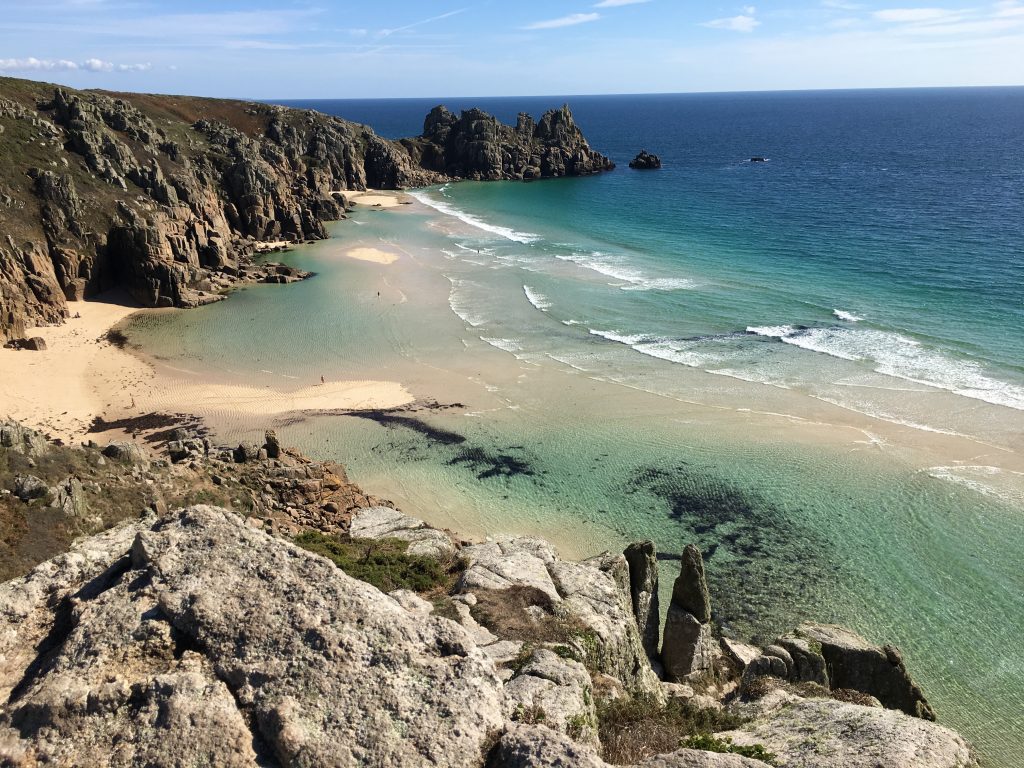 People tend to forget how stunning Cornwall is, away from the beaches. Where is your favourite inland spot?

I love the moors, so ancient and atmospheric, so I must choose Carn Euny, the Iron Age village near Sancreed, in the heart of West Penwith, which is an extraordinary, haunting place, strategically situated to give residents a view of surrounding landscape and easily defensible: you can easily imagine a community raising children and animals there.

What do you think gives Cornwall such a different vibe?

Cornwall is country in its own right: it has its own language, identity and once had its own parliament. But separate parts of the county are very different to one another, so I’ll talk about West Penwith – which my mother referred to as ‘real Cornwall’, which is where I live now. It’s as far as you can go without falling into the sea and there is a distinct sense of people washing up here like jetsam – it’s very bohemian and socially mixed: there are potters and poets and painters rubbing shoulders with the fishermen and farmers and cleaners and café workers: no one judges you by your profession or how much money you have. As my grandmother would have said ‘ansum is as ansum does’.

What does a normal day look like to you?

I still work as a fiction publishing director for HarperCollins so I spend most of my day sitting at my laptop editing and answering emails. At lunchtime I will walk up to our allotment to do some physical work – weeding and digging, and then I’ll sit on my writing bench there eating my packed lunch and watching seals. At weekends, I wrestle with my current work in progress in this same spot, come rain or shine: I always write a first draft in a notebook.

What is your favourite book set in Cornwall? 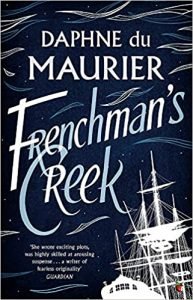 Having been raised in Fowey, it has to be a Du Maurier. Easy to pick Rebecca, which gets referenced in The Sea Gate; but I reread Frenchman’s Creek recently and I absolutely love how she gives us this really rather dislikable heroine and grey moral universe, and the most memorable romance.

What Cornish fact do you wish was better known?

That we were always a trading nation which reached out across the world. We were cosmopolitan, welcoming and diverse, we mixed freely with other merchants and traders: there were all colours and creeds here and we traded not only in tin and copper and minerals, but in cloth and fish and flowers and knowledge. 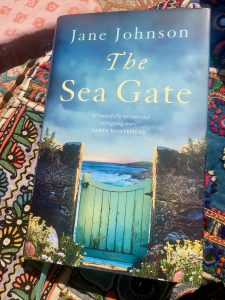 If you want to read more of Jane’s words and see her love of Cornwall shine through her stories, make sure to buy The Sea Gate

‘A beautifully written and intriguing story that stayed with me long after I had turned the last page’ Santa Montefiore.

‘I wanted to live in this story. Jane Johnson writes with such grace and ease’ Carol Drinkwater.

One house, two women, a lifetime of secrets…

Following the death of her mother, Becky begins the sad task of sorting through her empty flat. Starting with the letters piling up on the doormat, she finds an envelope post-marked from Cornwall. In it is a letter that will change her life forever. A desperate plea from her mother’s elderly cousin, Olivia, to help save her beloved home.

Becky arrives at Chynalls to find the beautiful old house crumbling into the ground, and Olivia stuck in hospital with no hope of being discharged until her home is made habitable.

Though daunted by the enormity of the task, Becky sets to work. But as she peels back the layers of paint, plaster and grime, she uncovers secrets buried for more than seventy years. Secrets from a time when Olivia was young, the Second World War was raging, and danger and romance lurked round every corner…

The Sea Gate is a sweeping, spellbinding novel about the lives of two very different women, and the secrets that bind them together.

‘I was completely swept up in this … Quite magical’ Rachel Hore.

‘I so enjoyed this. It’s a treat!’ Amanda Craig.

‘A beautiful, evocative story … This had me in tears’ Liz Fenwick.

Find out more about Jane and her other books at the following places.

Instagram: @allotmentbythesea  Which tells in pictures how we embarked on our lockdown project. It’s a work in progress.

Other novels (set in Morocco and Andalusia) 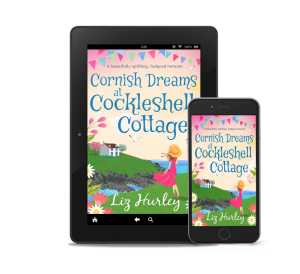 Sitting alongside the beach and just up from the gently lapping waves, sat a perfect cottage. She had found where she was going to live. Her own little cockleshell cove.

Ever since the Byrne sisters – Ariana, Aster, Clem, Paddy and Nic – discovered they were heiresses to the vast Hiverton fortune, their lives have never been the same. No longer living in poverty in London, they now own an estate in Norfolk, a castle in Scotland and a picturesque village in Cornwall.

When sensitive Paddy, the baby of the family despite her successful career as a model, swaps the catwalks of Paris Fashion Week for the cobbled lanes of Tregisky on the beautiful Cornish coast, it’s time for her to stand on her own two feet.

Soon, she’s settled in her new home of Cockleshell Cottage overlooking the wild surf, the seals her closest companions.

And when she meets ex-soldier Hal, she’s instantly smitten. Funny, considerate, and not to mention drop dead gorgeous, he’s perfect in every way apart from one – he’s engaged. But after a misunderstanding brings the two together in ways they couldn’t have imagined, it seems like they might just change each other’s lives.

Will Paddy fall in love with more than just the glorious blue skies of Cornwall? Or are there storm clouds gathering ahead?

Escape to the Cornish coast this summer with this completely uplifting romcom – perfect for fans of Holly Martin, Phillipa Ashley and Milly Johnson.

Readers are falling in love with Cockleshell Cottage…

‘had such a delightful rom-com feel…loved every minute of reading this book. I highly recommend it.’ ☆☆☆☆☆ Reader Review

A New Contract with Hera Books