Obviously there are no lectures at the moment so he’s one from a few years back.  All of these houses added to the inspiration for Ariana’s ancestral home – Hiverton Manor.
Finally arrived in good time, with my glasses and without interruption. So far, so good. Our speaker arrived and I was thrilled to see that he was a total dandy. Blue suede brogues with red laces, bright pink socks and a pale pink pocket  ‘kerchief. Brick coloured trousers, a checked shirt and a pin striped blazer, topped off with a spotted tie and horn rimmed glasses.  It was a magnificent display of confidence and style. I figured that the following talk was going to be entertaining.  And then we were off. Dr Bostwick was not just knowledgeable but also enthusiastic as well as rather eclectic and we rushed through staircases, hallways and chimneys. Front doors and windows stood open before our whirlwind tour of the shift in 16th century architecture. He spoke about Bess Hardwick as though she was an old friend and all the while he delivered his knowing commentary in an accent that brought Alan Bennett to mind. It felt familiar and gossipy and very entertaining indeed;  it also turned out to be very educational. 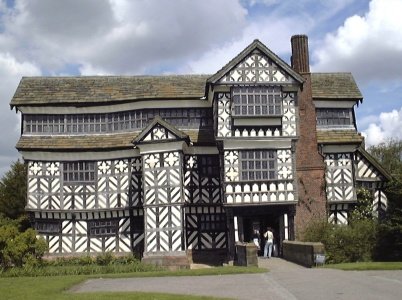 Little Moreton Hall (above) was built in stages but was finalised to look how we see it today around 1560.  Compare that to Longleat Hall (below) which was completed in in 1580, only twenty years apart and yet they look like they come from different centuries. Out with the old and in with the new. Architecturally, this was a time a massive developments. 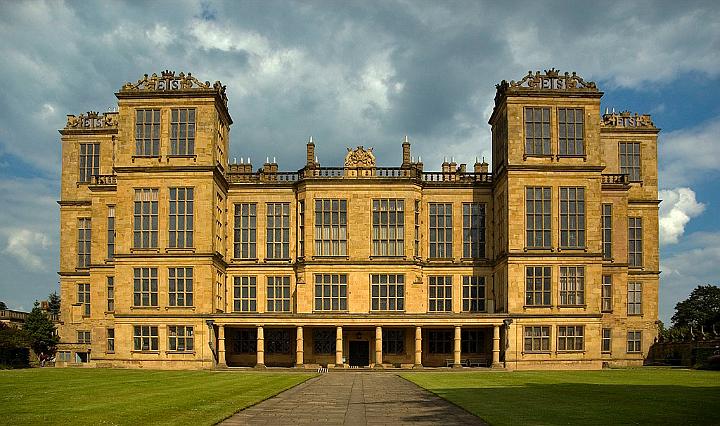 There was a hell of a lot of stuff discussed but the following caught my attention.

The main door.  Rather like a church, you would enter a home at one end and progress to the other. The grander the house, you would climb a staircase to the main floor upstairs. By traversing the hall you had a sense of procession and a chance to view the wealth of the house as you approached your hosts. Over the decades though builders began to employ a symmetrical look to the front of the house but had to contend with the fact that the main door was deeply off kilter.  A wide range of trompe l’oils were employed to try to balance things up. Francis Bacon believed houses were to be lived in rather than looked on and didn’t consider the issue important. 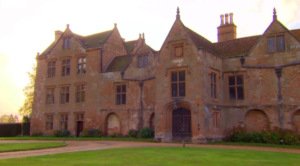 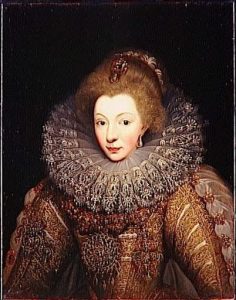 Bess Hardwick however revolutionised things and turned the main hallway 90 degrees with the door
in the centre of the house and the hallway running through the middle of the house towards a grand staircase at the rear where guests then walked up to the main hall upstairs.  This hall was so grand that Hardwick Hall was called more glass than brick.  It was also so cold in winter that Bess had  five sets of curtains on every window and found the main hall intolerably hot in summer. Thankfully the reception floor was only for entertaining, the family lived on the other floors that were far more hospitable.  Unfortunately a more recent resident of  Hardwick wasn’t as wise as Bess and tried to live mainly on the grand entertaining floor.  Eventually he too fled to the other floors.

So that was symmetry taken care of.  Then there was the start of perpendicular architecture. Obviously castles went up but most homes sprawled and grew sideways, tacking bits on here and there.  With the inclination for symmetry the houses began to rise.  The first obvious rise was the heraldic crests above doorways.  First the family crest. Then a local Lord’s or another family crest and finally at the top the royal crest, if you were very grand. After crests we had columns. Corinthian, topped by Ionian, topped by Doric. A reversal in importance over the family crests. Then windows began to conform to the sense of rising grandeur.

Our language grew with our homes

I also loved demonstrations of how our language has developed.  In the serving hall cups were placed on a side board for servants to fill and distribute.  This was the Cup Board. A collection of dinner plates or where everyone dined together was called a mess.
Bread was kept in the Pantry (pain try) Buttery (Bouteille) is where the bottles are kept.  A lot of our “Dignified” language comes from the French and our down to earth language is Saxon.  For example: animals as livestock is Saxon; pig / sheep / cow. But animals as food is from the French, pork / mutton / beef.

This could be me

Finally, here is a very evocative piece of writing describing a female scholar and her chamber.

Lady Anne Clifford (1590 – 1676) distinguished herself, according to Edward Rainbowe (a contemporary scholar and preacher), by combining effective household management with effective textual management:


“she would frequently bring out of the rich Store-house of her Memory, things new and old, sentences, or sayings of remark, which she had read or learned out of Authors, and with these her Walls, her Bed, her Hangings, and Furniture must be adorned; causing her Servants to write them in Papers, and her Maids to pin them up…. So that, though she had not many Books in her Chamber, yet it was dressed up with the flowers of a Library” 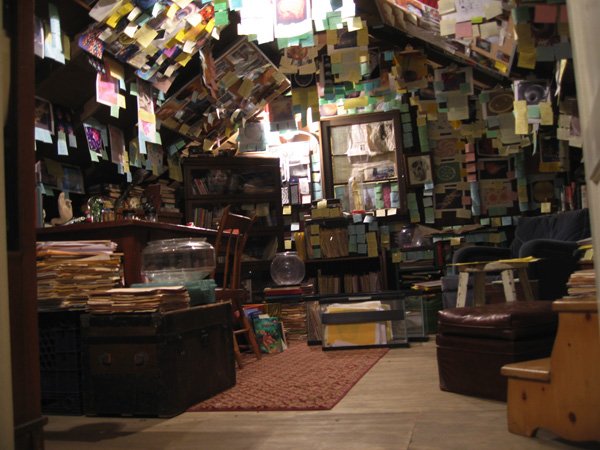 So, a whistle stop tour and the bits and bobs that I got out of it.

And if you want to know what Ari’s home turned out like read more about it here.

Extract from A New Life for Ariana Byrne by Liz Hurley

‘Are we there yet?’
Leo had a point; this was a very long drive with lovely green pastures on either side. The wide green parkland was dotted with the odd large tree and the tarmac drive cut through the green swathe but still there was no sign of a house. Just as she was convinced she had taken a wrong turning, the van crested a small hill and before her, standing behind a second set of smaller gates, was the prettiest house that Ari had ever seen. She stopped the van in wonder.
‘Wow.’
In the evening sun, the red brick walls glowed and the many panes of glass twinkled back a warm light. The house was huge and charmingly haphazard – with additions clearly having been added over the years.
Roughly, it seemed to be three storeys high or maybe four, and at least twelve windows wide along the front of the house. There appeared to be one initial large building with small extensions added on to one side over the centuries. At the other end of the central building was a large wing jutting forward.

A large bay window fronted one section of the house, continuing up past the roofline to become a tower. It sat along the skyline with an array of chimneys in ornate red brick patterns bristling against the sky. At the other end of the house at the edge of the wing was another tower, round this time, with arrow slits in it. Sections of the building had tall panels of narrow elegant windows, while other areas had lower rectangular windows with lead lines crisscrossing over them like a black and white harlequin. Throughout this mishmash of features ran red bricks and capped and cobbled flint stones, lending the entire structure an exquisite harmony.She looked at the boys, her eyes as wide as plates. ‘That’s it then. At least it’s got a roof on!’ And then she burst into laughter, with possibly a slightly manic edge. She’d been convinced, despite Mr Fanshawes’ reassurances, that the estate was in rack and ruin and that she had actually inherited a great big pile of dung.