Live like a Countess – Staying in a Landmark Trust property

Every winter Steve and I rent a Landmark Trust property and spend a mid-week break living like royalty.  The Landmark Trust is a charity that saves remarkable buildings from destruction. They restore them and then they rent them out as holiday lets. We have stayed in castles and banqueting houses and this time we stayed in a Bath House.

The Bath House
In the words of The Landmark Trust:

The Bath House here, it is thought, was designed in 1748 by the gentleman-architect Sanderson Miller for his friend Sir Charles Mordaunt. Good historical fun was had by all: the rough masonry of Antiquity, used for the bath chamber, is contrasted with the polished smoothness of the new Augustan age seen in the room above, where the bathers recovered.

The dome of the main room is hung with coolly dripping icicles and the walls have also been frosted with shells, arranged in festoons as if ‘by some invisible sea-nymph or triton for their private amusement.’ This was the idea of Mrs Delany, better known for her flower pictures, who advised the Mordaunt daughters on where to find the shells. Their work was skilfully reproduced by Diana Reynell, after terrible damage by vandals.

Now when we holiday we always make sure there are two beds. It saves a lot of kicking if one of us is sleeping louder than the other can tolerate. When we stayed at the West Banqueting House this involved getting up in the middle of the night and heading off to the Almonry, which was across the field, shooing sheep as I went. There was frost on the grass and shooting stars in the sky. It was an incredible memory. Anyway, that’s how important a second bedroom is. But, the Bath House only has one room and one bed in it; there wasn’t even a sofa in another room I could retreat to.

The thing is, I really wanted to stay there because of what is lurking in the basement. So, having bought earplugs and a hammer and checking with Steve if it was going to be okay, I booked it. 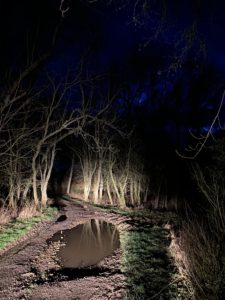 I have to say I was nervous, it looked really small. I was worried that Steve would be disappointed with my choice. The thing is, he has no input, he just turns up and says wow. That’s his choice, he likes the surprise and he doesn’t much care for the research and planning. We set and finally we overshot the gate and turned around and tried again. We seem to do that a lot; as we get close to the perfectly described instructions, we overshoot the entrance and then have to drive on until we find somewhere to turn around.

Heading off the main road we drove slowly down a muddy rutted track, half a mile into a very atmospheric wood. I started to make jokes about axe murderers. Steve glared at me so I stopped.

We knew we had arrived when we saw the obligatory Landmark wheelbarrow. A sure sign that our accommodation was nearby, if not yet visible. Loading up the barrow, we headed down the track through the trees. As we walked we startled a few deer and the air was full of birds calling to each other. We appeared to have interrupted a Disney scene. Quite quickly our accommodation appeared in the trees, a tall octagonal building.

Parking the wheelbarrow we got the keys and opened the solemn black door.  I love this bit.  You just never know what it’s going to reveal. Total tease. it was another door!  So we unlocked that one as well. And then Steve said Wow.

The door opens straight into the sitting room / bedroom / dining room. it is a room of incredible beauty. The walls are painted a dreamy sea green and the ceiling and upper walls are festooned in swags of seashells and icicles.  Huge windows look down over parkland and everywhere you look you swim in wonder.  We looked at each other and grinned broadly and then began to explore. The room held a further two doors, the first opened into a tiny but perfect kitchen; if you are used to cooking on a boat you’ll feel at home.

The second door opened onto a spiral staircase. Upstairs was the bathroom. Basically a bathroom has been installed in the loft space, up twenty eight steps (damn right I counted them!) It was perfectly functional, but not my favourite bathroom, and not enough hot water for a deep bath. We’d done all the heating boosts but it just wasn’t playing. It probably didn’t help that the weather was close to freezing.

But it was the steps that led down that were more interesting. Aren’t they always? The steps leading down were small, steep and made of stone. Even more enticing was the sound of running water. Behind us sat a glorious, elegant Georgian room, below us something very different beckoned. We descended.

After a few turns we arrived at a running stream! A running stream in the base of our home,  and another door; the walls were all rock and the air was cool and damp. We opened the door and walked into a walled cavern-like room with a large plunge pool in its centre. At the far end a wrought iron gate looked out over the valley. The pool was about five foot deep, ten foot long and freezing cold. To this I can testify as i went for a couple of swims in it.  It was wonderful but I imagine it would have been nicer if the air temperature was in double digits.

For the rest of our stay we lit the fire, read our books and went for runs. The surrounding woodland is a managed shooting estate so you need to keep to the track.  I even saw a white deer. That felt very special. As well as both fallow and muntjac deer, we saw hares, rabbits and a gazillion pheasants. They quite liked hanging around the bench and the pet’s graveyard.

When we weren’t holed up in our little grotto we explored  Stratford-upon-Avon and Blenheim Palace. If we had to choose between Blenheim or the Bath House we both decided on the Bath House. Another brilliant stay at a Landmark Trust property!

I hope you enjoy the video, make sure in the bottom right you select HD 1080.

Incidentally Shell Grottoes were all the rage once, a chance to glory in the delights of nature whilst not actually going to the sea.

There’s a lovely shell grotto at Endsleigh House and another at Hampton Court House and one at Woburn Abbey and apparently an absolutely stunning one at Margate.  For my money though they are not a patch on the Bath House.