Patrons, Podcasts and a thousand thank yous to my guides

I’ve been tidying up my subscriptions. Those things that I paid for, monthly or annually, and no longer need or want and I looked at my savings (small as they were) and decided to re-invest them so to speak, in people that have been incredibly helpful in my career (haha) thus far.

So, who to give my pennies to?

When I first decided to publish a book I struggled but managed it and quite quickly published Scribbles from the Edge, Losing it in Cornwall and A History of Mevagissey. But honestly, I was floundering, every new step was a massive struggle, it was isolating and difficult and so I started to look around the internet for help.

My first discovery and quite frankly the team that got me up and running was a course called the Self Publishing Formula 101 run by a thriller writer called Mark Dawson. Worth every penny. From here I launched my Cornish Walks series, and then my fiction titles.The philosophy of the SPF team is anyone can publish a book, we don’t need gatekeepers, we don’t need the Big Five publishing houses. Heady stuff! And they’re not wrong. They are a little Amazon centric but Amazon is the largest player in the self publishing world.

I discovered podcasts through them. I’m a lover of Radio 4 but not audio books so I wasn’t sure how I would feel about podcasts. Turns out I love them.

From their podcasts I discovered Joanna Penn, of The Creative Penn, she’s been advocating self publishing for an even longer time and believes in publishing as widely as possible. She likes Amazon but there is so much more! From her, I learnt to broaden my horizons. My audio book of A History of Mevagissey became non exclusive and can now be purchased online anywhere.

Finally I discovered the Bestseller Experiment. They are a fun team and a lot more embracing of the traditionally published model as well as self publishing. In fact, I was interviewed by them for a podcast on how to pitch your books to booksellers. Which was fabulous. I also, through them met my publishers Hera Books for my new fiction series. 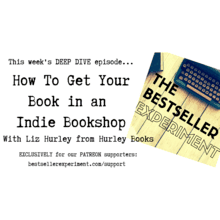 So three podcasts all with slightly different takes on the publishing industry which reflects me as an author. A bit of a hybrid, some self-pub, some traditional pub. And each has a patreon scheme.

Do you know what a patreon scheme is? I didn’t. It’s a way to support a creative enterprise, subscribe on a monthly basis to help them with their efforts. Like a patron. So I’m going to patronise the three of them. With my pennies. it’s not a lot but I hope as a gesture they will appreciate that I am saying thank you for the help and support they have provided me.

In the meantime if you fancy learning more about self publishing I can highly recommend any of the previous podcasts/websites/courses. Click on their links and have a look around.

Liz Hurley is signed up by Hera Books