Harry the Rubbish Gun Dog and his Rubbisher Handler!

As some of you may know we have a springer spaniel going by the name of Harry. He’s three years old now, and I have always meant to get him trained properly, it is after all what he is bred to do, and after my column on prevarication the other week I finally picked up the phone and spoke to a trainer.  On the phone, Mel seemed very nice, and we agreed to meet up and see if Harry was up to the grade.  We met up at Minions, and in reality, she seemed every bit as nice as she had on the phone but it soon became apparent that it would be a question of whether I was up to the grade just as much as Harry!

So Harry and I got out of the car, and instantly my heart sank. All around us were wild ponies and sheep, I’m afraid Harry is pretty good but not perfect, and I was concerned that things might career down the pan before we got started. However, Mel agreed that they would be too distracting for him and we moved them on so that we could begin our work.  At first, Mel wanted to know what I’d taught Harry; we’d obviously already failed the ignoring sheep test. I explained that we’d only really done the basics but that Harry was pretty good at those. It turned out that he wasn’t.  I demonstrated how well Harry walked to heel, Mel pointed out that Harry was walking to heel when he felt like it because he liked my company not because he had been told to. The minute something more interesting came up, say a gorse bush or a butterfly, he was off. His recall was equally suspect. Yes, he did come back to me but not always, once again that passing gorse bush could be an attractive thing to a dog with clouds in his head. The stay command worked well although I had been doing it wrong. Apparently, when you tell a dog to “stay” you must always return to him, you shouldn’t call him to you because stay means just that. If I want him to sit in one spot and then come to me, it’s “Sit” and then “Come here”. Or rather three blows on the whistle.  Which I didn’t have. 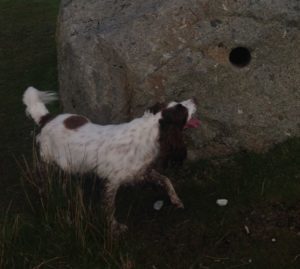 We then began to walk in circles and squares and figures of eight which I kept getting wrong, memories of my terrible attempts at dancing at Burn’s Night earlier in the year came flooding back, and Mel seemed quite bemused by someone that couldn’t complete a figure of eight without getting lost. After that humiliation, we progressed onto retrieval work, which Harry thought was great fun and acquitted himself fairly well.  At the end of the session, Mel thought that Harry had promise and I needed to do some homework, so we went away happy with our progress. So far, he’s walking to heel on the lead perfectly, and off the lead, he’s fairly good except for the odd gorse bush. Sit and Stay are also working well but he seems to have nose-dived when it comes to retrieving. One thing at a time is going to have to be our motto.  I’ll let you know how we get on.

All posts are written by Liz Hurley, author of SCRIBBLES FROM THE EDGE and LOSING IT IN CORNWALL These two books are collections of her columns, written for the Cornish Guardian. They available from Amazon as e-books or paperbacks as well as from Hurley Books.