Behind the Veil: the Arts of Islamic Persia  – John Osborne

So my second BODFAS approached and I was determined not to make such a mess of it this time. However, the fates are cruel and things cropped up. The phone rang as I was leaving, the car needed fuel, there were massive roadworks and eventually I arrived 10 minutes late and had to sneak in and sit at the back. Naturally as I reached for my glasses I realised I had left them by the phone. AGH! A fuzzy shadow play of pretty things followed. 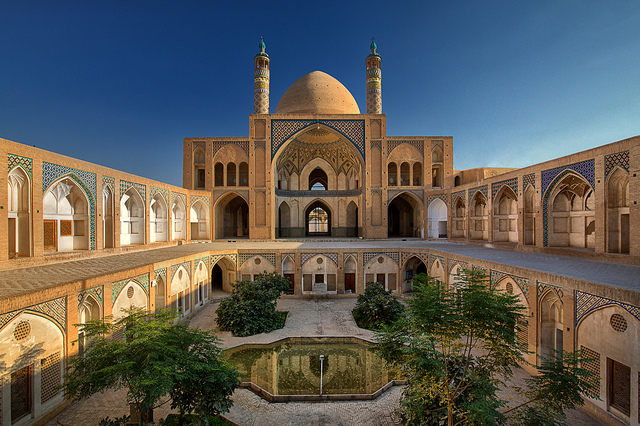 The talk was interesting but had a rather scatter gun feel to it. There was no obvious thread but I did learn an awful lot about the difference between Sunni and Shia Islam. Shia believe in a twelfth prophet coming back to save his people, worship at tombs of various holy men, women and scholars and have a relaxed attitude towards their religion. 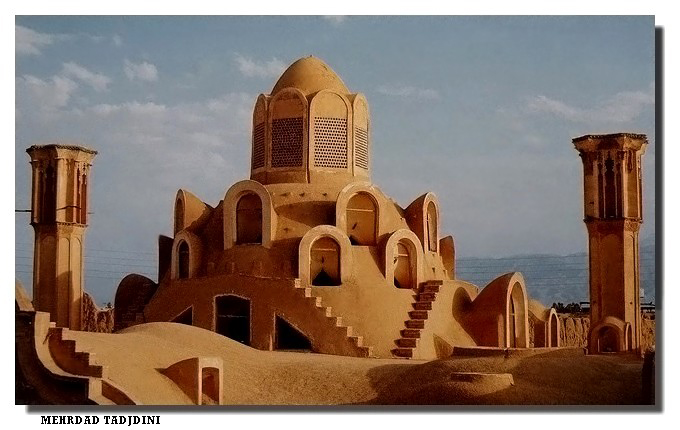 Sunnis are far stricter, they only worship Mohammed and are considered to be more fundamental. Persia / Iran is mainly Shia and has a strong population of Jews, Christians and Zoroastrians (the pre-Islamic religion) they are protected religions and have representation in parliament. Iran combines theocracy and democracy in that everyone votes, women as well, but the overall ruler is a religious figure. It’s not my country of choice but it has more going for it than we probably give it credit for. 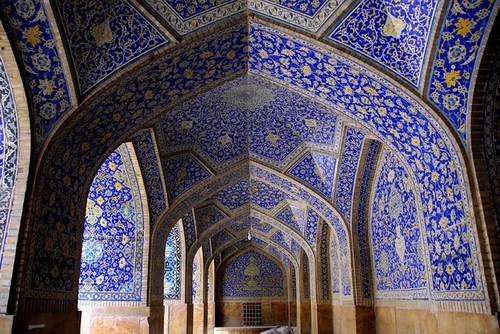 The main colour of Zoroastrianism is blue and this can be seen all through the religious decoration of Iran, showing the long standing religious feelings of Persia and their tolerance of earlier beliefs. 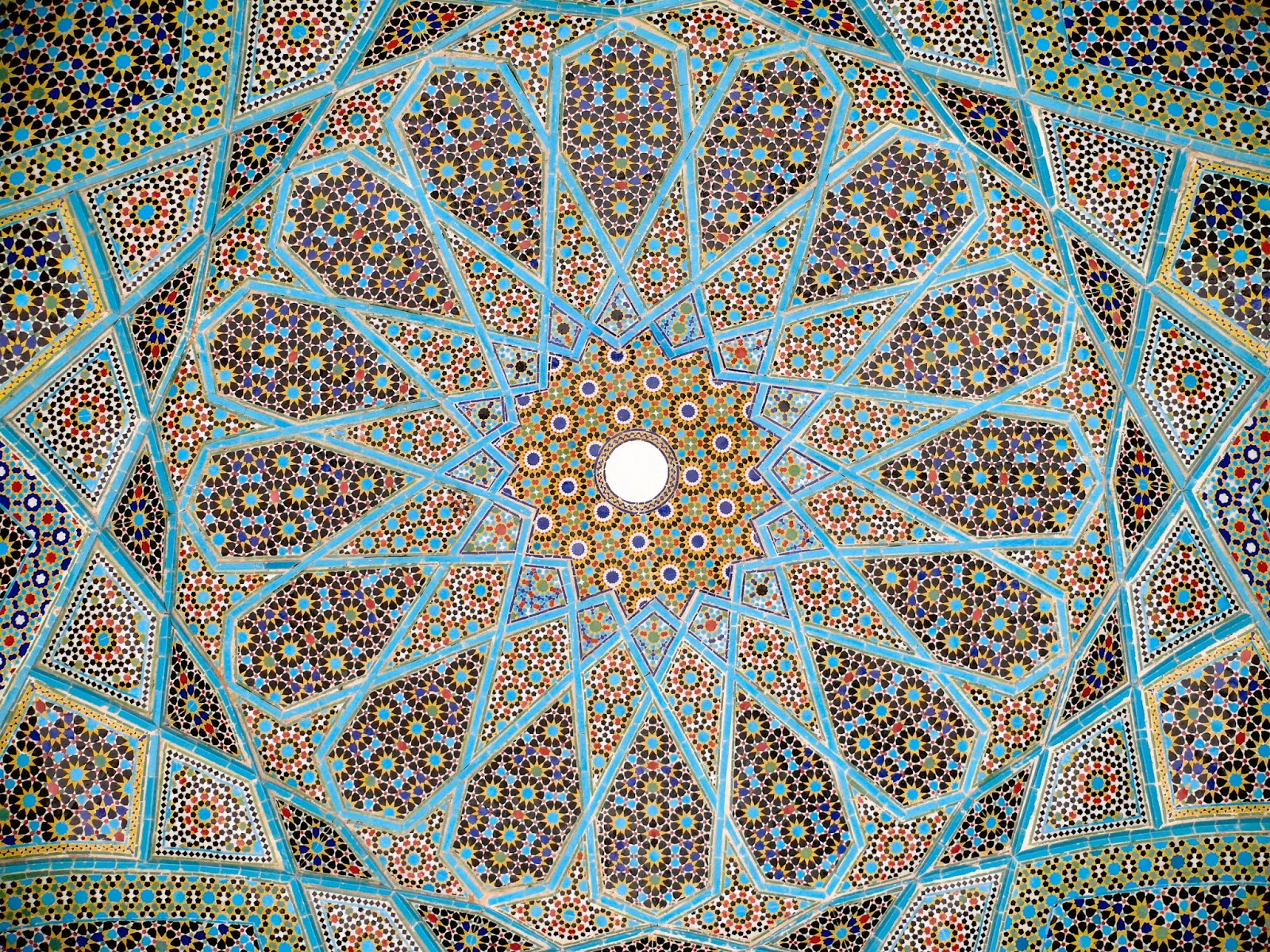 Islam forbids the representation of figures in its religious buildings which has lead to the most stunning tessellation patterns made in hand cut pieces of tiles adorning the temples.

Beyond the temples we see beautiful decorations of manuscripts and paintings often showing a strong mongol influence, or Persian art heavily influenced mongol art. At one time Persia stood in the centre of the Eastern and Western world. Everyone passed through Persia on there way to somewhere else and there art and culture was shaped and changed by visitors and influenced cultures as it went on.

We didn’t get time to look at much in the way of writings but John did read one poem from Persia’s most celebrated poet Saadi Shirazi. Translated from the original Farsi, this brilliant little poem was written in the 1200s and has very strong echoes of Dr Suess! 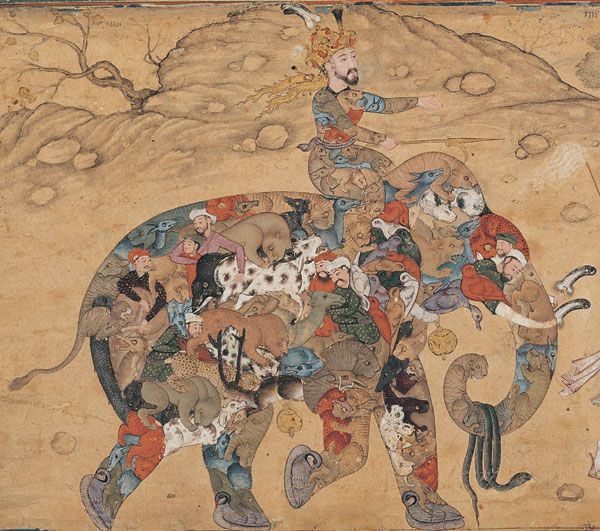 Observe this precept whenever you can –
Never make friends with an elephant-man;
For an elephant-man has a pet to keep,
Eating and drinking, awake or asleep,
And if you are friendly one day you’ll see,
When the elephant-keeper comes to tea,
That, not in the least by chance or whim,
The elephant will accompany him.
Then as soon as the animal’s through the door
You’ll notice cracks in the parlour floor,
And however much you may frown or stare
He’ll sit across-legged on an easy chair,
And swill your tea with his cumbrous trunk
Till you think ‘My Word, what a lot he’s drunk’
And if you should offer a mild reproof
He’ll be up from your table and off with your roof.
In your sorrows you’ll only sink deeper and deeper
If you ever make friends with an elephant-keeper.
SAA’DI
Translated by JCE Bowen
Published in Poems from the Persian (Scorpion Press o/p)

Hatshepsut – The Portrait of a Female Pharoah BODFAS NADFAS